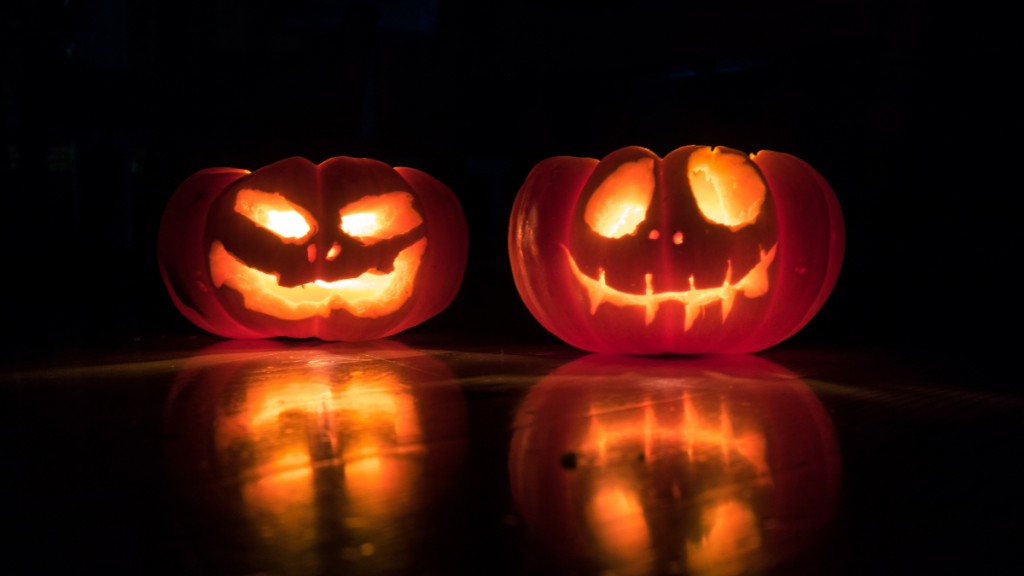 Come on, now, Halloweeny adults—the kids don’t get to have all the fun on All Hallows’ Eve. Take a little time after the little gremlins have crashed from all the trick or treating, sugar highs, and costume wearing to have a spooky good time for yourselves! Here are a few good picks for Halloween night that offer great scares and much more!

A perennial favorite of not only Dan from our podcast, but also me and my lovely wife. This is a wonderful screwball comedy with horror and film-noir elements starring the incomparable Cary Grant. When two nice old ladies (Grant’s maiden aunts) are discovered as serial poisoners on the same night he’s married—and on Halloween, no less—old Carey has to figure out the best way to deal with them. Throw in a serial killing brother coming home to visit and you’ve got a regular pickle on your hands! It’s got more twists and turns than a roller coaster and more laughs than a barrel of Marx Brothers. Plus, if you just want great character acting (Peter Lorre, anyone?!?) and really good direction (Frank Capra, my fave!) you can’t miss with this all-time classic!

Continuing the theme of black-and-white, but ramping up the striking visuals and genuine scares, this is one of the greatest ghost stories ever told on page or screen. The Innocents is adapted from a Henry James novella by none other than Truman Capote, and directed by Jack Clayton; with, I must add, some of the most breathtaking cinematography I’ve ever seen by Freddie Francis. Deborah Kerr plays a governess assigned to two orphaned children inhabiting Bly Manor. Ghostly happenings begin and they’re not what you expect. The subtext to this one is just about as disturbing as a western film was allowed to get in 1961, so it’s definitely adults-only; but it’s well-made and profound enough for a great spooky movie night. In fact, I screened this one with a friend who doesn’t watch many horror movies and he loved it, so I know for sure that this one still plays!

There are a few horror movies that I hold dear to my heart because I saw them so early into my cinemania. Gremlins, The House on Haunted Hill. Jaws and Jaws 2. And this movie. This was my introduction to Stephen King, to George A. Romero, and to anthology horror, and I still look on all three very fondly. In fact, I’m a fan of anthologies so much that I’ll sometimes string a bunch together on Halloween just for the episodic fun of it. If you’re just looking for a good set of five stories told in the old E. C. Horror comics style, look no further and accept no substitutes! All your creepy critters are here, from zombies to sentient cockroaches, and it couldn’t be a wilder ride. I guarantee you, ladies and gents, you’re not leaving this movie without a few scares and a bunch of fun!

Originally, I was going to do an entire article just on Vincent Price. That didn’t materialize, but as mentioned in the previous section I love this movie and Price in it. If you’re looking for the perfect introduction to public domain horror films, Vincent Price, or director/producer/consummate showman William Castle, look no further. This is a creepy, somewhat schlocky classic about an eccentric rich man who proposes to pay $10,000 to anyone who can stay an entire night in “the world’s only really haunted house.” If that doesn’t get you interested, you should know one of the great early jump scares is in here and it’s pretty effective even today!

Consider this and Arsenic and Old Lace the bread on each side of a spooky sandwich. This isn’t a horror movie, no doubt about that. But its affection for horror/monster movies, and movies in general, is worn on its sleeve. There’s an atmosphere in Matinee that feels undeniably linked to going to see a horror movie with your friends. The Key West setting and summertime vibes are kind of overlookable and there are even scenes that seem shot to accentuate a Halloweenish orange. Plus, the story has such a nostalgic sweetness that it’s irresistible. Mix together some fun comedy and a great early performance by John Goodman and you’ve got a real winner here. Oh, and it’s directed by Joe Dante of Gremlins 1&2, The Burbs, and The Twilight Zone: The Movie—all of which you should also see!

That’s it for our Family Fears series this year on Cinematic Doctrine! If you liked it, let us know and we’ll continue the series next year. If you hated it…well, whatever, I had a lot of fun. So let us know either way! Hope you all have a blessed, safe, and fun Halloween! We’ll see you next month.

Stephen McFerron likes movies. It’s that simple. From the lowest depths of the drive-in to the highest peaks of arthouse; the grand golden age to superhero spectacles, he’s all in! Since watching Gremlins and Jaws at a young age, Stephen has had an appetite for the strange and fantastic, as well as the old! If you’re here to explore movie history, or learn more about the best of today, Stephen’s your guide! He may even say something mildly profound along the way… if he’s lucky!