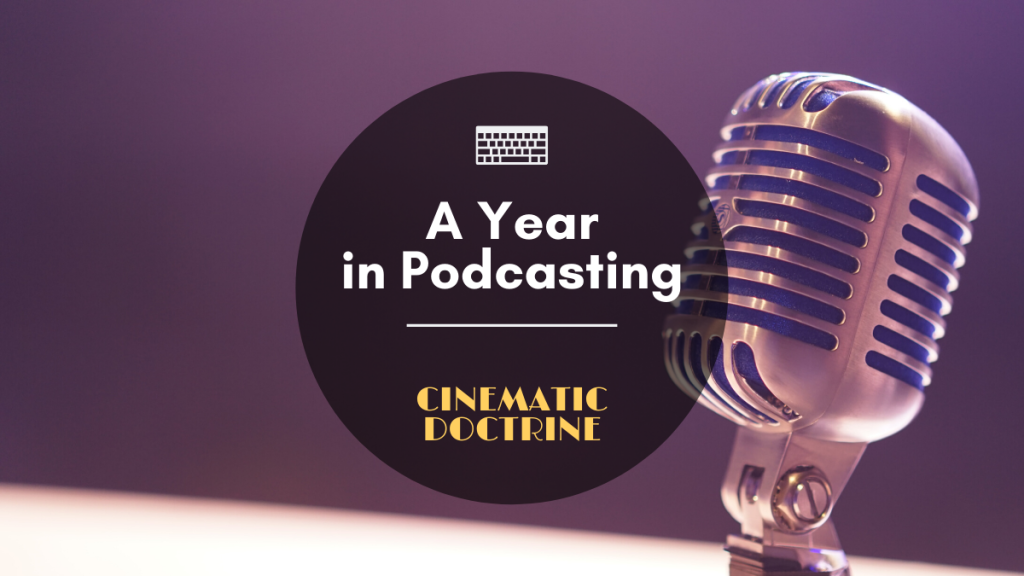 Hi, my name’s Melvin, and what a ride it has been!

So, you might be wondering, “Melvin, why are you being so thankful? Why are you posting a blogpost called A Year in Podcasting?” Well, that is a good question, and you can head on over to Patreon.com/cinematicdoctrine to see why. Basically, by reaching specific levels of support there are goals that can be achieved, and the most recent goal to be met was one where I share my story in podcasting.

But I must confess, this goal has been met for over three months now. In other words, I should have written this three months ago. The thing is, I did not feel as though it was right to simply type out some sort of “We did it, guys!” and then point fingers entirely at myself saying, “Actually, I did it!”

No, I felt that something like this demanded more honesty, because Patron supporters support people, not brands. I think it is important for you to know the truth about what this year has been like, and ultimately, how important your support for me is, both in being a listener and a Patreon supporter.

You see, after starting this podcast, I had to leave my job. The summer of 2019 was a difficult one filled with a unique trial that the Lord laid at my feet. I was struggling emotionally and spiritually at a place I had been working at for over five years. In fact, I had been working for that company since living with my parents. Before me was a crossroad that was so beyond anything I had experienced before, and ultimately the right choice was to lay my cards down and fold.

Leaving that company was the right choice, and I know it in my heart even now, but it’s easy to look back and say, “That’s it. That’s where I went wrong.” And feel like all of my current problems – whether financially, emotionally, or anything – are because of that one moment, that one trial, and perhaps, that one wrong choice.

And from that point onward all I had was a part-time custodial job that wasn’t nearly as financially beneficial. However, when I was not doing that, I would spend my days at home working endlessly on the podcast. I would watch new movies like The Art of Self-Defense or review TV-Shows like The Dark Crystal: Age of Resistance. I would research into why Christianity is averse to things like fictional magic in Halloweentown (Thanks again, Patron-supporters!) or deconstruct the cultural significance of Amazon Prime’s challenging post-modern superhero epic The Boys.

It was in those moments that I really began to grow in my stride, sharing deeply what I was feeling both in how those pieces of film and television spoke to me, but also how I believed they interpreted and spoke about culture. In the case of The Art of Self-Defense, we witnessed a writer/director’s struggle to understand toxic masculinity, and alongside that, masculinity itself, and sought to find clarity in what it means to be a man from Scripture. And in the case of The Boys, an episode that I found both heartbreaking and enlightening to work on, we speculated based on historical, cultural milestones as to why a show as nihilistic and post-modern as The Boys would ever become as popular as it did.

That is not to say I was not wrestling with Him (you read those statistics on abusive clergymen and try not to spar with the Big Man himself a little). I wrestle with God plenty. But what I am trying to get at is that when I take a look at where I was a year ago and where I am now, it is not that I have recorded over 50 episodes or that the podcast has reached another great milestone. It is not even that I may or may not have made a horrible choice quitting the most financially stable job I’ve had in my life in the summer of 2019. It is that I am not the same man, the same husband, the same podcaster, the same Christian that I was when I started.

And to that, I cannot help but praise the Lord for his continued work in me. To think that the Lord has permitted me to grow so much in the last year is amazing and taking the time to write this out has been both cathartic and eye-opening. I’ve seen how the Lord has taken my anxiety away from me over the course of this project, how he’s blessed me with healthy relationships alongside frequent contributors, and how the Lord has brought joy in my life despite the choices I’ve made.

God has worked so much in me in the last year, and you all have been a part of that. And Lord willing, I hope I have been able to do the same for you.

Until next time, stay cool.